Forbes: The Joy Of Alpine Golf In Andermatt

Late summer in Switzerland–it’s one of the European Tour’s greatest attractions.

Clear blue sky, crisp air and mountain peaks that take the breath away.

The Tour visited the Swiss Alps in its very first year (1972) and it has been back ever since. Indeed it is the only tournament on that first schedule that has returned to the same venue every season.

That’s watching golf, however, and there’s an even greater joy than seeing someone else hit golf balls in the sky: that's hitting them yourself.

Andermatt Swiss Alps is a new layout for golfers to test themselves on and it is one which, in a mere three years since being opened, has been awarded Best in Switzerland by the World Golf Awards and taken first place in the Swiss Golf Awards (voted for by over 15,000 players).

Architect Kurt Rossknecht was inspired by the heathland and Highland courses of Scotland when he designed the course, a genesis that is clear when playing it, and yet this is also a very Swiss experience from the first hole to the 19th.

The first two holes follow the contours of the slopes which eventually become the Mittagstock mountain.

To the right glacial waterfalls and streams tumble from on high, their tinkle combining with cow bells to produce the soundtrack to the next four hours.

The third and fourth holes offer the best views on the course, the snow-capped peaks beyond the Furkapass looming in the far distance, but they test the lungs and the long game as they climb the slopes.

The fifth is a par-three across a ridge and the par-4 sixth descends from it. Picking the right line is essential from the tee box. Find it and the ball hurtles down the fairway like a bobsleigh down a track, miss it and the second shot is played blind to a green far below.

The seventh and eighth holes cross the meadow which gives the town of Andermatt its name (“at the meadow”). The former is a long, but wide par-4, the latter a par-5 with a pond which sucks in anything short or left.

At the par-3 ninth water protects on the right and demands a long and confident carry.

The back nine returns across the meadow with three par-4s, the first two greens well-protected by more ponds, the last of them boasting a green that hugs the side of a steep slope.

Shortly after putting out it is time to test the lungs again with a climb to the 13th tee, perched high above the green and testing club selection as much as the quality of strike. It’s a short hole and yet feels like one of the toughest tests on the course.

The par-5 14th is almost a relief, offering the opportunity to smite two blows towards the distant green, with the old town in the far distance.

The 15th and 16th holes then offer two stunning vistas, a par-4 and a par-3 travelling in opposite directions and being the only holes which feature mountain slopes directly behind them. You will never witness a ball flight like it. In this thin, brilliant mountain air the ball soars into a green background, easily visible throughout its entire journey.

The par-4 17th and par-5 18th close-in on the town and the clubhouse. The final hole is especially tough, a worthy closing hole, pushing your resolve to the last with water down the left and bunkers on the right.

It sets you up for refreshment in "The Swiss House," the modern clubhouse which boasts a panorama of the entire Ursern Valley.

Creating a tournament-standard golf course in this location has not been easy, but it has been achieved utilising natural irrigation and ecologically-sound design.

Part of the regeneration of the town of Andermatt, a golf hotel will be built in time, but golf packages are already available at all hotels in town including the Chedi Andermatt, Radisson Blu Reussen and Gotthard Residences.

Nor is that all the golf on offer in this part of the world. A short drive up the valley is the extraordinary Realp Golf Course, a nine hole layout that is pretty much unlike any other.

Holes sneak across ridges, climb severe slopes and descend down others.

It is a unique and stunning golfing test, enhanced by the stunning views.

This is a Swiss double-header for any golfing bucket list. 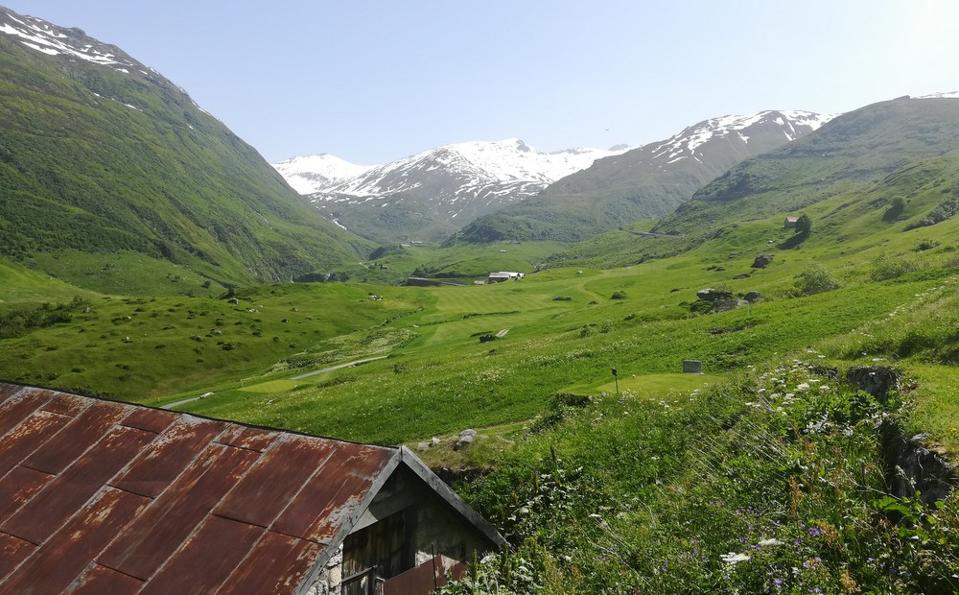