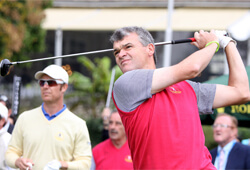 Paul Lawrie OBE is known to one and all in golf as “Chippie” because of the excellence of his work around the greens. He is one of only eight players to have competed in more than 600 European Tour events. In those, he has amassed eight victories, including his unforgettable Open triumph at Carnoustie in 1999.

Over the course of his 31-year professional career, he has twice represented Europe in the Ryder Cup, in 1999 and 2012, winning his singles match on both occasions. He has also played multiple times for Great Britain & Ireland in the Seve Trophy, as well as being part of Scotland sides at the Dunhill and World Cups.