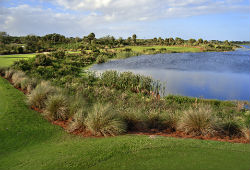 Dedicated to environmental stewardship from its inception, Osprey Point Golf Course became just the second golf course in the United States to earn Audubon International’s Certified Classic Sanctuary designation soon after it opened in 2011. The course’s commitment to the environment was strengthened in 2015 when it became the first course in the nation to be re-certified as a Classic Sanctuary.

With 27 holes spread out over 200 acres adjacent to the Florida Everglades, Osprey Point is home to a large variety of fauna and flora. The facility adheres to stringent maintenance guidelines to ensure the preservation of native wildlife habitats, but hasn’t sacrificed course quality as Osprey Point has won numerous awards during its five years, including being named one of the top 50 courses in the United States to play for under $50 and being voted the best public golf course in South Florida by GolfAdvisor reviewers.